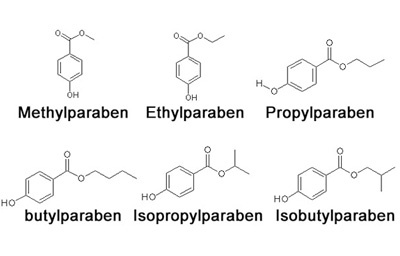 Parabens are considered broad-spectrum preservatives used primarily to prevent the growth of harmful microorganisms such as fungi, yeasts and bacteria.

Those admitted by the cosmetics legislation in Europe are:

The European Union banned in 2014 the isopropylparaben and isobutylparaben parabens, and others such as phenylparaben, benzylparaben or pentylparaben (actually very little used). It is considered that there is not enough information about its risks so it is not possible to assess its safety and therefore should not be used.

Parabens have been used since 1925 as cosmetic preservatives in dentifrices, creams, deodorants, shampoos, children’s cosmetics, gels, lubricants, tonics, makeup, nail lacquer …, but they are also used in their different types to preserve pastries, precooked food , soda, sauces and even fresh meat. They are also used for the composition of various pharmaceutical products, such as cough syrups, antacids, vaginal fungicides, antibiotics and in paracetamol and ibuprofen compositions.

They have a preservative and protective function, prevent infection with microorganisms (microbes), fungi or bacteria. Parabens are widely used in the cosmetic industry, approximately 70-90% of frequently used cosmetic products.